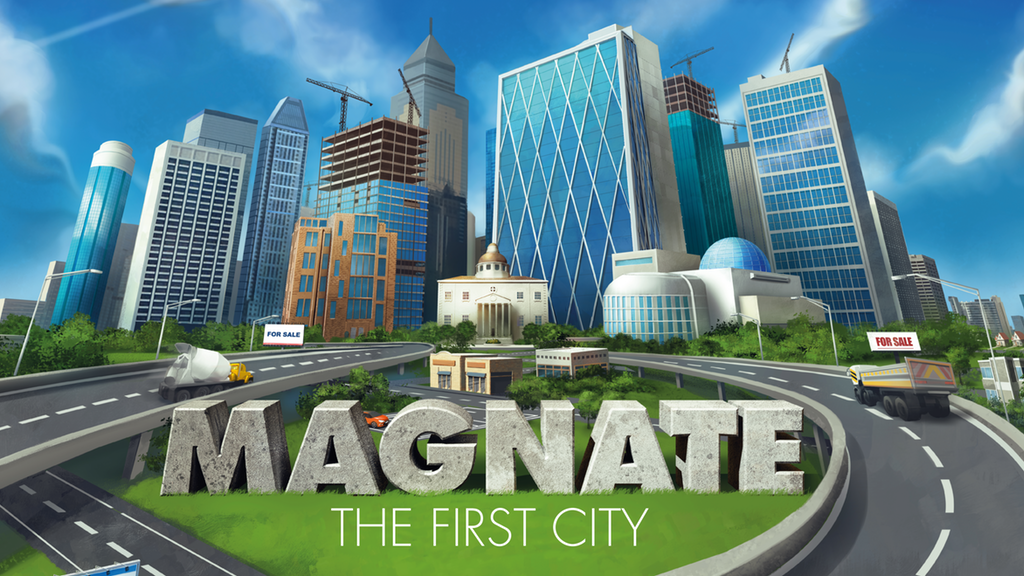 Magnate is an exciting property/city building strategy game for 1-5 players. Make as much money as you can before the market crashes! Pre-order Magnate here today!

Latest Updates from Our Project:

If all goes to plan, Magnate will be shipping to fulfilment centres shortly. But before it does there's some final checks we need to do. There should be more news ahead of the next usual time for an update, so in the interests of staying in monthly contact but also protecting your inbox from excess fluff, I'm going to keep this one brief.

While things have not moved quite as quickly as I expected in the last update, I am glad to say that all Magnate's components have now been manufactured and are awaiting final packing.

Even more exciting, the first early production copies are on their way to me as I write this:

Given we have final games, why are we not shipping just yet?

That's because I don't want the games to leave the factory until I've seen a final version of the game (not just a pre-production sample). Magnate is a physically complex product with miniatures and specialised components (like the wallets) that need  special attention. It's been crucial all the way along to make sure the quality of everything is high; if we really need to have a particular part re-manufactured at this point, we will. So I want to see a final mass produced version before we sign it off.

In addition,  as I mentioned previously, the pandemic has made container shipping not only painfully expensive but more time consuming to arrange than usual; both hunting around for deals and collection times on product. So please bear with us while we get these crucial things sorted.

I recently interviewed Paul Grogan - the editor of Magnate's rulebook - on Producing Fun. If you're interested in getting your teeth into the subtitles of rulebook writing and the kind of problems we encountered in the process of editing Magnate's rulebook, this episode is absolutely worth a listen.

Since the last update, I also appeared on the Needy Cat Games Finding Games podcast. Sophie asks me lots of excellent questions - and if you want to know a little bit more about Magnate and why I set about publishing it, I think you'll find it interesting.

That's all for now!

It's update time again and we finally have some good news on our timeline!

Given the Chinese New Year shutdown, production has taken much longer than it normally would over the last few months. But I am now very happy to say that manufacturing is now expected to complete in mid-April! We had a few issues with getting all the add-on components together and the insert also delayed things. But I think you will be very pleased with the insert's third and final iteration: It should make an enormous difference to convenience.

All of this means games could begin their journey to fulfilment centres next month. I say could, because containers are still very expensive so we may need to make a slight strategic delay to ship the goods affordably: although there is a degree of personal financial hit I can and will take to just finally get this game into your hands. If there is a delay, I am hopeful that would be short. But, as always, I believe it's best to be very transparent on these issues.

All of this means I hope to be actually shipping to the vast majority of backers in the middle of this year. Some backers in Asia will may get their games fairly soon after the game leaves the factory in China. A few advance copies will also travel by air to myself and some select reviewers to prepare for what is shaping-up to be a very solid retail release for the core game (non-tycoon content). This has been very exciting to see come to fruition. I feel tremendously grateful to you for making this happen: without you there's no way this would be getting near the retail shelves!

This has taken a long while - I should have budgeted more time to get this part right given my inexperience with inserts. But I am glad to say we are now there, and I am very pleased with the results:

As you will see the insert is now transparent. This material is stronger than the previous black plastic and I think is aesthetically superior too; Magnate is a colourful game and it'll be lovely to see all that colour hit you as you open it up.

The two building trays are much the same as before. But the insert now features two trays designed for very easy storage by the board: a small removable tray for all the tokens (other than the player's company markers) that will make setup and packdown a breeze (prototype tenant and advertising tokens featured here):

And a compact money tray:

It's not as nice as our deluxe money tray of course, but it's a practical and compact solution that keeps the money organised for players without those.

Between it and the spare space in the box, you'll be able to pack all of the Tycoon and forthcoming promo content (more details on that in another update...) into your main box easily. All the trays are secured by nice firm lids that hold everything in place.

I think this is a practical insert that will hopefully get Magnate to the table far more easily and keep the focus on what it should be: playing Magnate not baggy management simulator as it can for some big games.

I have finally seen the samples for these and... to those who have added them-on, I think you will be very impressed. All of the company logos are discreetly embossed on the bottom right of the wallet, using special versions of the logo art designed for this purpose. I can only think of a single word: Classy.

That's all for now. In the next update, I should have a better idea of timelines. The factory may even have started shipping those games!

Podcasts galore: Interview with me about Magnate!

I was interviewed about Magnate for the Who?What?Why? Cast - a podcast about game design. Mike was a great interviewer who asked a lot of smart questions about the game. I hope you find it interesting.

My podcast - Producing Fun - has now properly launched as well, with two episodes already up. You can check it out here and on our new Youtube channel!

That's all for now.

As I warned in the last progress update, this one was likely to be pretty short.

In China, manufacturing shuts down almost completely for weeks either side of the Chinese New Year celebrations (Feb 12th this year). With the pandemic, this has been worse than usual, with workers leaving even earlier to see family and avoid travel restrictions.  So as expected, things have been pretty quiet on the Magnate front: we've been mostly using the time to develop other game titles. I am glad to report our production manager is back in the office now though and we eagerly await what - I hope - is the last revision to the insert. *Cross fingers*, this should also be the last major hurdle in the production process.

I've been listening to a lot of podcasts over the last year and have been finding myself really enjoying being a guest every time that I've been invited on one (on that note, several should be coming out in the next month or so which I'll post here). So I started wondering, as a bit of an alternative to my blog, if I could come up with a podcast people would enjoy that would do something genuinely different: after all... there's no shortage of good ones out there!

After spending time doing some research and a little brainstorming about what I really wanted to listen to, it seemed like there's a bit of a gap around the boardgame publishing industry itself and the vast amount of different people and processes making successful games involves. There's some really great design focused ones like BGDL or Ludology. But there's not something with more of a product and market focus - which is my area of interest and experience from my dayjob. So, as a result, I have decided to launch Producing Fun (trailer here): a podcast about all the people involved in taking a game from mind to table.

I feel honoured that multiple experienced industry figures I have a lot of respect for have already agreed to be guests on the show. So I have high hopes that we should be able to make, at least a few, interesting episodes that will be useful to someone out there!

If you have any particular suggestions for topics you'd like to see covered, let me know.

That's all for now.

All the very best,

Thanks to your kind support Magnate made it into round two of the competition! It garnered more than 100 nominations in about 24 hours.

This means we're in the running for the Economic game category of Most Anticipated Game of 2021. And while there was never a lot of chance we'd beat Frosthaven in the overall category 😉, I think we're in with a real chance with this one!

Can you lend us your vote again to make it count in the final round? It's just a bit of fun, but it's a good way to increase visibility too as we close on the end of the manufacturing process.

The fastest way to get to Magnate is to use the find in page feature of your browser (Cmd/Ctrl+F) but otherwise, the voting is pretty straightforward: Just select the Magnate checkbox under "Category: Economic" (number 17) and then scroll down to the bottom where you can hit the vote button:

As before, you'll need a BGG account already if you don't have one. It's easiest to register first here if you don't before trying to vote.

That's all for now! Thank you so much again!

Just a little bit of news and a quick request for help.

One of our backers, John, just nominated us for this BGG competition. If we get enough thumbs we go to the next round.

I didn't realise this competition existed so we're really late to the party: as you can see from the number of thumbs we have so far (publishers are strongly encouraged to get backers and fans to vote). It's just a bit of fun, but I think we have a real shot at winning the "Most Anticipated Economic Game" category - so, I thought why not give it a go?!

If you're looking forward to getting Magnate, could you thumb the GeekList item on BGG? That's all you need to do to get us to round 2!

You'll need a BGG account already if you don't have one. It's easiest to register first here if you don't before trying to vote.

That's all for now!